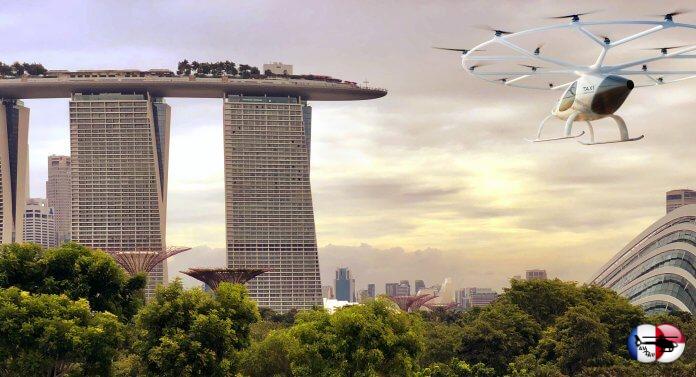 Volocopter plans flight trials in Singapore in the second half of 2019.
Urban air mobility: Ready for take-off

The Asia-Pacific region is the testing ground for a number of urban air mobility vehicles. Emma Kelly looks at some of the developments.

Urban air mobility projects are underway around the world as stakeholders seek solutions to today’s increasingly congested transportation networks. Global management consultancy Roland Berger has identified more than 75 companies working in the sector. “We anticipate that passenger drones will be a realistic means of transport for intra-urban and regional journeys within the next five to 10 years,” predicts Manfred Hader, partner at Roland Berger.

Roland Berger expects the global market for passenger drones to remain relatively small over the next few years, but 3,000 could be in the skies by 2025 and there will be “exponential growth” thereafter as costs for passenger drones come below those for helicopters. Initially, they will be mainly used for airport shuttles and city transportation, it believes.

Major aerospace manufacturers including Airbus, Boeing, Bell Helicopter and Embraer; car manufacturers such as Toyota; IT and telecommunication providers; and digital disruptors including Uber are already working on projects in various parts of the world.

A number of lesser-known players are also engaged in activities, with the Asia-Pacific region being the centre of their work.

Chinese technology company EHang is readying its autonomous air vehicles (AAV) for series production. The Guangzhou-based company designs and develops a range of AAVs for urban air mobility, command and control centre and for smart city management and logistics.

EHang first presented its AAV, the EHang 184, at the Consumer Electronics Show in Las Vegas in 2016 and has been working on the product ever since. The vehicle can carry a single passenger up to 130km/h in up to force 7 typhoon conditions. It is electrically powered and is designed with full redundancy so if one part of the power system fails, it can still operate a normal flight plan.

More than 1,000 test flights have been conducted, including a vertical climbing test reaching up to 300 metres, a loaded test flight carrying 230kg, a routed test flight covering 15km and a high-speed cruising test that reached 130km/h.

EHang is currently working on improving the passenger experience and adding optional manual control, as well as a two-seat vehicle with a payload of up to 220kg. EHang received its special flight permit from the Civil Aviation Administration of China (CAAC) in 2017 and is working with CAAC on airworthiness standards.

The Chinese manufacturer is working with the Dubai Roads and Transport Authority (RTA) to introduce the EHang 184 into Dubai as part of its intelligent transport network, with test flights already conducted.

EHang believes AAVs are the solution to the growing population of the world’s cities. By 2030, 5.2 billion people will live in urban regions – one billion more than today, it notes. Urban dwellers will account for 60 percent of the world’s population which will put further strain on the road transportation network. Air taxis will add a “third dimension”, says EHang. They take off and land vertically, require minimal space, are environmentally friendly, with high-performance batteries and short charging times, EHang says. AAVs will also be able to transport urgent medical supplies or conduct high-risk operations.

“Flying to work instead of being stuck in traffic jams, this has already become reality in some regions of Asia and we wish to make it possible in the rest of the world,” says Hu Huazhi, EHang founder, chairman and CEO.

EHang is already active in aerial drones, with an aerial drone food delivery service operational in Guangzhou in conjunction with a local food store. The EHang quadrotor delivery drone can fly 40km/h, carrying 5kg over 7km.

German company Volocopter has selected Singapore as the venue for the next round of flight tests for its urban air mobility vehicle. The Volocopter is an emission-free, electrically-powered aircraft that combines helicopter and drone technologies. Designed specifically for inner-city missions, the eVTOL (electrical VTOL) vehicle takes off and lands vertically and is capable of carrying two people just under 30km.

The vehicle looks like a helicopter but features drone technology supporting stable flight and allowing it to manoeuvre through micro turbulences around tall buildings. The manufacturer says it is also quiet, with no noise typically heard over the background noise of a city at a flight height of 100m. It features 18 rotors, fully redundant power trains and an intelligent autonomous control system.

Flight trials in Singapore are planned for the second half of 2019 in a project supported by the Singapore Ministry of Transport, the Civil Aviation Authority of Singapore and the Singapore Economic Development Board. The partners are currently working together to determine a suitable flight test location, says Volocopter. The flight trials will be used to validate and verify the ability of the Volocopter to operate in Singapore’s urban environment, followed by a series of public demonstration flights.

Volocopter has started recruiting personnel for a product design and engineering team in Singapore and is also looking for local real estate, mobility providers and business partners keen to explore air taxis.

Singapore, which was selected due to its advanced technology and urban development expertise, has a highly-efficient and affordable public transport network, but is challenged by a growing population and limited space for further expansion.

“Singapore is a logical partner. The city is a true pioneer in technology and city development,” says Florian Reuter, Volocopter’s CEO.

Bruchsal, Germany-based Volocopter, which has Daimler and Intel among its investors, has held a preliminary permit to fly from German authorities since 2016 and is hoping to receive a full commercial license from the European Aviation Safety Authority within two to five years. The vehicle has flown regularly in Germany and in September 2017 it performed a public manned test flight in Dubai.

The company is looking at developing a whole ecosystem to make air taxis a reality. It sees air taxis integrated into the existing transportation system, providing additional mobility for up to 10,000 passengers per day with a single point-to-point connection.

Volocopter’s vision is one of Volo-Hubs and Volo-Ports where the former resembles cablecar stations with Volocopters landing and taking off every 30 seconds. Once a Volocopter has landed it moves into the Volo-Hub where passengers alight and battery packs are swapped on the vehicles. The Volo-Hubs will be the sites for charging and maintenance. Volo-Ports will provide direct access to companies, shopping malls, hotels or train stations. It expects the first commercial routes to open in three to five years.

Meanwhile, in New Zealand, the Cora electric, autonomous air taxis are under development by Zephyr Airworks. US company Kitty Hawk established the company in New Zealand in December 2016 to work with the New Zealand government, business partners and the community. In October 2018, Zephyr announced a partnership with Air New Zealand aimed at bringing autonomous, electric air travel to the country.

Cora takes off and lands like a helicopter. It has the potential to “take off from a rooftop and hop across a city, to transform a parking lot into an air pad in your neighbourhood. You wouldn’t have to know anything about flying a plane, Cora could fly for you,” says the manufacturer.

The manufacturer looked worldwide for a partner to develop the concept and ended up in New Zealand due to the country’s innovative and forward-thinking regulatory ecosystem, it says. Its partnership with Air New Zealand came about through the airline’s commitment to new technologies that make life easier and its interest in cleaner energy travel solutions.

The initiative is designed to bring together stakeholders in the public and private sectors to realise flying vehicles. The government sees flying vehicles as a solution to traffic congestion, as well as a new means of mobility for people living on islands and mountainous areas, and for carrying patients to emergency first aid or in disaster situations.

A number of Japanese flying car projects are already under way, including the Toyota-backed Cartivator SkyDrive and Tetra Aviation’s Tetra 3. Cartivator is aiming for the launch of its prototype vehicle by the end of 2019, with the vehicle ready to light the Olympic flame at the Tokyo Olympics in July 2020.

Japan’s Tetra 3 air vehicle has made it through to the second phase of the Boeing-sponsored GoFly competition, which is a two-year, US$2 million international competition to create a personal flying device. Hundreds of entries were considered by a panel of industry experts, with Tetra the only Asia-Pacific candidate in 10 winning entries.

The entries are tasked with creating a prototype that can safely carry a person 20 miles without refuelling or recharging with vertical or near-vertical take-off and landing capability. Four teams will be selected as the best prototypes in the phase II, which will close in March, with the winner to be revealed in late 2019.

Boeing and Japan’s participation in 777X

Деловая авиация на Ближнем Востоке и в Средней Азии Boeing and Bamboo Airways today confirmed an order for 10 787-9 Dreamliners valued at $3 billion according to list prices. The order for the super-efficient and longest-range member of the Dreamliner family was unveiled during a signing ceremony in Hanoi, witnessed by U.S.[…]