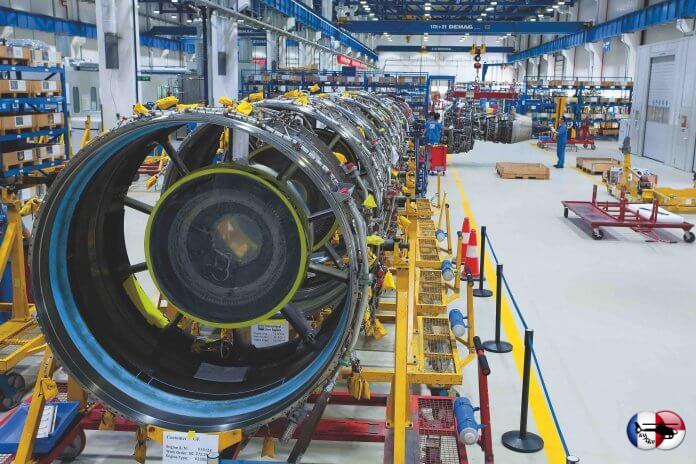 Engine in service at MTU Zhuhai, China facility.
Engines-Powering ahead

The year 2018 will go down as the year when aircraft engines were in the headlines for all the wrong reasons. New aircraft sat on tarmacs waiting for engines, operating aircraft were grounded, services cancelled, and billions of dollars lost through poor reliability and flawed design issues. Michael Doran examines the issues.

The boom in aircraft orders meant that despite all this operational turmoil, engine OEMs continued to fill their order books and by the end of 2018 have appeared to have weathered the worst of the storms, ready to face 2019 with a renewed sense of optimism.

The big engine development for 2019 will be the first flight of the Boeing 777X, utilising the new General Electric GE9X engine. The first engines have been delivered to Boeing with flight testing and certification scheduled for 2019, followed by entry into service in 2020.

Heading up the programme for General Electric is Ted Ingling, general manager for the GE9X programme, who spoke with Asian Aviation on what has been achieved and what the key milestones for the 9X are in 2019.

“We have our second phase of flight testing going on and we have confirmed our assessment of performance and it’s in a very good place,” he said. “We are really happy with the performance of the engine. Starting with the GEnx, going through the LEAP, and culminating with the 9X has really honed our development process. We learned a lot about things we would like to improve on and the 9X has been a huge beneficiary of re-thinking the process of how we develop new technology and apply it to the engine.

“We did that on the premise that you will have less disruption when you bring the technology to the engine as an assembly, proceed to certification and then make improvement so you go into service with a matured product,” he added. “We are not so bold as to say this approach fixes all issues, but it certainly is an approach that we believe helps to find a lot of the issues that can enter into a new product. So we are focussed on getting the performance, emissions and all of the specs where they are supposed to be and doing it all in a path to line up as we go into service.”

In 2019 the major focus will be on finishing the certification and compliance issues while supporting Boeing in its flight-testing programme. At the same time production of the engine is scheduled to begin at the US factory in Durham, North Carolina, where the eight development engines were built.

“These engines are going together very well and the amount of effort we spent in the early days on tooling design and integrating the assembly team into the upfront dialogue has really paid off,” Ingling said. “The engine is assembling like it’s a mature product and we will start building engines to a production plan Boeing already has given us. Finished engines will start flowing out in the second half of 2019. We have had many learnings along the way and the good thing that came out of all this activity is the performance of the engine, the consistency, that comes from every engine in our compliance and development programme and the levels of performance delivering both on the ground and then confirmed in the air.”

Asked about the issues his competitors faced in reliability in 2018, Ingling preferred to focus on what GE has done to ensure a smooth entry into service for the 9X. “That’s a tough one to answer. I can tell you that if I just look internally, and that’s the only place I can provide insight into, we’re constantly learning and trying to improve our products,” he said. “And we provided a tremendous emphasis on this maturation and readiness piece of the process on the 9X and I think it shows in the performance we are getting. But it takes discipline to apply those learnings and make sure you have eradicated things that prior programmes came across throughout the 30 years or so of service life they have been out there.”

At the same time, it unfurled a plan to cut 4,600 jobs at a cost of £500 million over three years. The company said that none of these job losses are linked to the ongoing Trent 1000 issues and that all technical changes are expected to be fully embodied into the Trent 900 and 1000 fleets by the 2022.

In October 2018 it emerged that deliveries of the Trent 7000, used exclusively to power the new A330neo, had fallen behind schedule and would impact on Airbus deliveries into 2019.

In a statement at the time, Rolls-Royce said “while the production ramp-up issues in the fourth quarter are regrettable, such issues in the early stages of a new engine programme are not uncommon in our industry. As we move into 2019, we are confident that Trent 7000 production and delivery volumes will increase significantly to meet our customer commitments.”

In December 2018 the current engine of choice for the A330, the Trent 700, celebrated its 2,000th delivery. Since 1995 the engine has completed more than 50 million flying hours, carried more than 3 billion people on 12 million flights with 88 different operators.

The Trent XWB provided the power for a Singapore Airlines A350-900 ULR to fly between Singapore and New York, the world’s longest commercial flight. The flight covered more than 16,600 kilometres in just under 18 hours, no doubt catching the attention of another long-haul carrier, Qantas, who aims to launch Sydney to New York non-stop.

However, it is the issues with the Trent 1000 that will remain a big focus for Rolls-Royce in 2019 and beyond. In a statement to Asian Aviation, a company spokesman said that work is continuing with regulatory authorities on the certification of the newly-designed intermediate pressure compressor blades for the engine.

“Once certified, this new design of blade can then be fitted to package C engines as they come in for overhaul, helping to reduce the current customer disruption on this engine variant,” the spokesman said. “Despite significantly increasing our Trent 1000-related maintenance, repair and overhaul capacity over the last 12 months the number of aircraft on the ground remains at a high level. We are determined and confident that as we execute our plans, we will see a significant improvement in aircraft on ground as we progress through the first half of 2019.”

In some regards, 2018 was a year of two parts for Pratt & Whitney, both focussed on the Geared Turbo Fan (GTF) engines powering the Airbus A320-neo family aircraft. All of the promises made about engine performance have been met or exceeded with fuel savings of 16 percent, noise reduction of 75 percent and emissions cut by 50 percent. But the GTF has had a year of fighting reliability issues with in-service aircraft grounded and Airbus deliveries coming to a standstill from a lack of engines leaving so-called “gliders” parked in Toulouse.

The irony is that the engine is a masterpiece of technology and when it is flying it is doing everything that Pratt & Whitney designed it for and promised it would do. The order book stretches out many years into the future based on what the engine can offer, despite so much negative publicity around what it has actually delivered in terms of reliability.

As we enter 2019 where does the situation stand? In a statement to Asian Aviation, Pratt & Whitney said that GTF deliveries are back on schedule and that it is on track to meet its commitments to Airbus. “As of November 1 there were 280 GTF powered aircraft delivered to 30 operators around the world. Total engine revenue hours are over 1.3 million for the combined GTF fleet with engine despatch reliability at 99.8 percent for the A320neo fleet,” the company said.

In Asia, Pratt & Whitney has two of its global GTF service centres. One at Japan Aero Industries in Japan and the other in Singapore at Eagle Services Asia, the joint-venture between Pratt & Whitney and SIA Engineering.

In Singapore, the joint-venture partners have invested more than US$85 million in upgrading the facility to handle the P&W1100G-JM engine used to power the Airbus A320neo family of aircraft.

Pratt & Whitney has its sights set firmly ahead to 2019 and leaving the reliability and poor delivery performance issues behind them. The year “2018 has been a year of catch-up,” a company spokesman said. “We met our customer commitments, nearly doubling GTF engine production and MRO output from 2017. We are maturing the production and MRO facilities faster than any other programme in our history and clearly demand continues to rise.”

The unsung heroes of the engine troubles are the MRO organisations that have been met with a perfect storm of repairing design faults and integrating the new engine types, keeping legacy engines flying and dramatically increased workloads from fleet growth.

In Asia, this is exactly the situation that Jaap Beijer, CEO of MTU Maintenance Zhuhai, describes as making 2018 “a really tough year for us, especially on the V2500 and CFM56 engines, which are our core business. There are many older legacy engines still flying, mainly due to the lower fuel prices, and these are coming down in increasing numbers for overhaul,” he said. “Engine MRO shops are fully loaded for the next three to five years just keeping up with the current demand.

“In Zhuhai we are pushing to expand our facility by 50 percent in 2019 and get to 450 shop visits a year by 2021,” he added. “MTU is doing this at all our sites around the world and this is just to keep up with the demand we already see.”

For 2019 the aim is to expand output by 10 percent by addressing two major constraints, building their skilled workforce and securing the spare parts needed to keep engines flying.

“It is absolutely more difficult to find the right people but we have a major programme in place in China that is paying off already,” Beijer said. “We have close collaborations with the universities in our area and we take in graduates and put them through a one-year training programme. We started that last year and they will be ready to go in 2019. For the higher-level engineers we do presentations at universities every quarter and we are also working in the global market to attract skilled people to come and have an experience in China.”

With so many older engines being kept in service well past their expected retirement, getting hold of spare parts is also a major constraint for engine MROs. “What keeps me most awake at nights is finding spare parts. With the heavy demand for new engine types the supply chain is not able to keep up with the demand for spare parts as well,” Beijer said. “The OEMs are working on it but this is the biggest problem we see going forward.”

When questioned about why all this demand has not been planned for, Beijer said that what has happened in the last few years has made capacity planning almost impossible.

“Who could have recognised that the oil price would be so low that the old engines are totally affordable to fly? But now it is climbing again the pressure is on to get the new types into the market which is heavily affecting the supply chains, especially for parts. Also, the entry-into-service issues at all the OEMs have increased MRO demand unexpectedly and the engine market is booming with order books full for the foreseeable future.”

Transat has signed an agreement for the sale of its wholly-owned business unit Jonview Canada, the country’s leading incoming tour operator, for $44 million Cdn to Japanese multinational H.I.S., which specializes in travel distribution. The transaction is subject to the approval of the Competition Bureau of Canada and to other usual conditions. It is[…]

Japan Airlines (JAL) will strengthen its network in the two largest cities of Brazil, Sao Paulo and Rio de Janeiro, with the start of a new codeshare arrangement with American Airlines, beginning January 27, 2013. JAL will add Rio de Janeiro as a new destination in its international network, and[…]