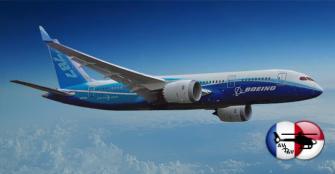 Historic airplane to be displayed in Japan’s main aerospace cluster, inspire next generation of aviation

“It is fitting that we bring Boeing’s first-ever 787 Dreamliner, also known as ZA001, back home to Nagoya, the heart of Japan’s aerospace industry,” said George Maffeo, president, Boeing Japan. “Many of our partners here spent countless hours to develop and produce the 787 Dreamliner’s airframe structure and Centrair was with us from the very start of the journey. ZA001 carried all of our dreams and aspirations, and has grown to symbolize the storied partnership between Boeing and Japan’s outstanding aerospace industry.”

“We are honored to be selected by Boeing to house the permanent display of the world’s first-ever 787 Dreamliner,” said Masanao Tomozoe, president and CEO, Central Japan International Airport Co., Ltd. “This milestone will allow us to significantly contribute to the aerospace community as well as the Greater Nagoya region by spurring the imagination and interest of future aviation pioneers here in Japan.”

Деловая авиация на Ближнем Востоке и в Средней АзииVolocopter plans flight trials in Singapore in the second half of 2019. Urban air mobility: Ready for take-off The Asia-Pacific region is the testing ground for a number of urban air mobility vehicles. Emma Kelly looks at some of the developments. Urban[…]

Деловая авиация на Ближнем Востоке и в Средней Азии +VIDEO This season’s Red Bull Air Race World Championship has been unpredictable from the start with several racers still in contention for the title going into the final round at Indianapolis, USA at the weekend. But it was a first championship[…]

Деловая авиация на Ближнем Востоке и в Средней Азии +VIDEO British adventurer James Ketchell is to attempt to be the first pilot to fly an open cockpit gyrocopter solo around the world. Ketchell, a UK Scouting Ambassador, is already the world’s first and only person to row across the Atlantic[…]